Our Rare Earth Biomagnets are properly focused Negative (-) and/or Positive (+) Polarity. This is a very important factor because the response of the individual magnetic poles has differing effects on the physiology of the human body.

NEGATIVE or geological North is always marked with the Negative symbol (-) and/or colored green. The Negative Pole helps the body to normalize and supports healing painful conditions. The Negative Polarity can be used anywhere on the body.

POSITIVE or geological South is always marked with the Positive symbol (+) and/or colored red. The Positive Pole stimulates all forms of life, including bacteria. Techniques using positive polarity are used sparingly and only for very specific therapies.

A recurrent problem in this science and the biomagnetic health and research industry is that magnet manufacturers, and many people in general, do not understand the important difference in universally marking the poles correctly.

Additionally, some Biomagnet companies are actually insensitive or ignorant in the use of proper field therapies. It is important for you, the end user, to understand the basic, vital difference between the geological North (negative) and South (positive) Pole effects and to be ‘product wise’ when selecting magnetic products to be used for health therapies.

For example: Many magnet manufacturers put an ‘N’ or an ‘S’ on their magnets. But, their ‘N’ or ‘S’ marking is an engineers symbol and means North or South seeking.

What seeks the North? The South seeks the North. That means the ‘N’ on the magnet may be the South (positive) Pole, a dangerous pole to use indiscriminately!

This is important because incorrectly marked magnets can give energy that has been shown to be dangerous to your health if you're constantly using South (positive) on an area you wouldn't want stimulated such as an ankle with edema, or a tumorous area in the body, etc.

Knowledgeable biomagnetic scientists agree that biomagnetic applications be very specific in regard to using only the proper poles and that they be electromagnetically marked either Negative (-) or Positive (+).

Based on the simplest laws of physics, the wrong side of the magnet placed over sensitive tissue can cause damage. Remember, South Pole is positive. Positive is stimulating and could stimulate all forms of life including bacteria, viruses, increased swelling, increased cancer rates, etc.

The geological North Pole is negative. Negative charges create negative energy, the calming healing energy. Since so many do not know the difference between the true poles and the “seeking” poles of a magnet, BiomagScience as a scientific biomagnetic institute, has chosen to use Negative (-) and Positive (+) markings on our Biomagnets.

For your safety, all Biomagnets are triple tested with a measuring instrument known as a magnetometer. This testing device accurately reads negative (geological North) and positive (geological South). The universal markings for these poles are Green for Negative (-) and Red for Positive (+)

Be aware of what kind of Biomagnets you're getting before you buy. Insist on true geological North (negative) and South (positive). Wrong pole markings can be harmful to your health.

Learn more about Biomagnetism from the only complete book on the subject:

Conquering PAIN
The Art of Healing With BioMagnetism
by Peter Kulish 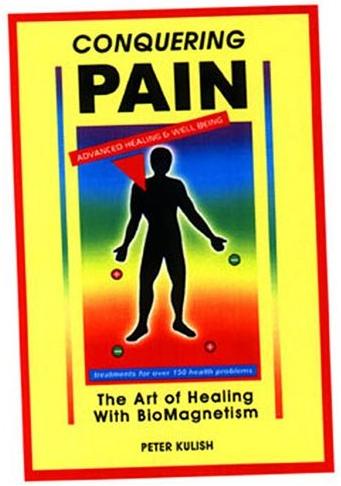 BioMagnetism FAQ | Which Side of a BioMagnet to Use? | Science of Magnets for Health

When you can't afford an alkaline water ionizer, but you need to get alkaline...

The New Standard In Juicers

When You Feel Too Lazy To Exercise

Is Fluoride in your water?

Food Your Cells Can Eat

Never put that phone to your head without WaveShield protection

Protect You From EMF

Healthy Cows Eat Nothing But Grass